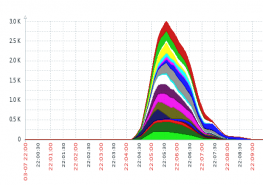 Increasing developer effectiveness gives you a competitive advantage and helps you meet SLA. In this blog post Janis Veinbergs will discuss how to improve the deployment process from the traditional file copy to something more effective, automated, and low friction while causing no downtime to end-users.

Janis Veinbergs is a developer at Data Center Operator DEAC with over 13 years of IT experience. As a joyful father of four, he says he enjoys learning, debugging, and delving into the inner workings of computers.

The webroot (and IIS Shared Configuration) are actually served from a single Windows share, which enabled a low-effort solution to simply copy files to a single location and keep them in sync with the IIS configuration.

That's how we'd been doing it for years, and it was obvious that something had to change.

The main issue is that whenever .NET resources (.aspx pages, razor views) change, they are compiled to assemblies on the initial request. When IIS is constantly flooded with requests to all potential resources, they must all be assembled at the same time on all IIS servers. When deployed at night, however, the delay was minimal because there were few requests, and those that did, compiling was completed rapidly.

PRO TIP: ASP.NET Requests Queued is a good performance counter for monitoring to identify when user browsers are just waiting for response and how quickly situation resolves after an update. A healthy value is 0 or something close to that.

We considered utilizing robocopy to copy updated files depending on timestamp, but that wouldn't work for us because the code would be deployed by several people. When Visual Studio publishes the project, the timestamps of files on different workstations diverge. Rsync would most likely be beneficial, but it would be difficult to implement on developers' Windows computers and the Windows share server. Furthermore, if different hosts generate files, minor changes in build techniques may result in checksums that differ.

We decided that we no longer needed to rely on a file share.

We've already been utilizing Azure DevOps for various purposes. So we came up with a new deployment concept:

Let's get one thing straight before we go into build and deployment: we use the Azure DevOps online service. This might be an on-premises installation or any other CI/CD platform of your choosing. Nevertheless, we use self-hosted agents to complete the build processes. We are talking about solution, which consists of multiple .NET projects.

The full build publishing can be seen under DEAC European Data Center Operator technical blog: Bringing down ASP.NET deployment interruptions from minutes to blip of a time with Azure DevOps

Once we have the artifacts ready (archive of website files), we are ready to implement Release.

The release must copy given files to other directory and instruct IIS to change base path from where it will server files. We had 2 options to choose from:

We went for the second option and split some operations into multiple steps:

The great thing is that if any of steps fail for ANY IIS server before Deploy step, Deploy won't run for ANY IIS server and they will all be consistent.
In case of a rollback, we can open appropriate release, and for "Deploy my" stage - press Redeploy. IIS will immediately switch back to the appropriate folder.

Everything is set up so that when the production branch receives new code the build runs automatically.
After build publishing, deployment occurs automatically but is halted pending permission.
When we click the Approve button, the code is deployed, and we simply receive a notification within the corresponding channel using the Azure Pipelines Slack app.

Note: This does not include database updates, which still must be performed manually, but DACPAC deployment can eventually be put into a pipeline too. Fortunately, database updates are less often than backend code/frontend updates.

Did this information inspire you to improve your developer effectiveness in order to gain a competitive advantage?

Superfast and tailored solutions for specific and complex requirements.

Choose the most convenient way to receive fast DEAC support 24/7.