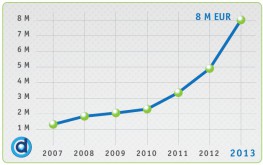 Data center operator DEAC in 2013 has achieved the largest turnover in the history of the company, reaching 8 million euro. The turnover growth has made up 64%, compared to the previous year, when company turnover was 5 million euro. Due to increased demand for IT outsourcing services, DEAC has successfully tripled its turnover within the last four years.

The rapid pace of company’s development is explained by a high demand for services in the export regions. According to the company’s representatives, areas where DEAC has registered the highest values of aggregate turnover are CIS countries, bringing 51% of turnover in the export market. Popularity of DEAC services in Latvia has increased three times, but still, in comparison with the export, holds only 43% of overall turnover.

“This year will begin with an important phase to strengthen the international competitiveness in the industry, expanding our activities in the European and US markets over next few years. Expansion plans will include data center infrastructure development in Frankfurt, Amsterdam and London, that will strengthen DEAC positions in the Western Europe and US,” DEAC CEO Andris Gailitis shares company’s plans. “We are planning to keep the growth rate, our goal for 2014 is to reach 11 million euro turnover.”

Company plans to promote a sustaining growth of the turnover rate based on the properly chosen strategy and high-level standards of data security and quality that were achieved by continuous investments in infrastructure modernization and innovative IT solutions.

Support and recognition in the local market last year inspired the company to accept more challenges. In 2013 data center operator DEAC received The Red Jackets award as one of the Top 25 best exporting brands in Latvia, and was nominated as the Best Exporter in the annual Export and Innovation Award 2013.