Cnews portal article: Russian companies have been given opportunity to protect the business by collocating data in the E

Cnews portal article: Russian companies have been given opportunity to protect the business by collocating data in the E
10.12.2010


Data center operator DEAC has opened representation office in Russia and is offering local customers to use "new opportunities for business protection with the data collocation within the European Union territory”.

Two operating DEAC data centers are located in Riga. The third data center will be built in Riga as well. As DEAC CEO Andris Gailitis says the data centers of his company give customers “new opportunities for business protection with data collocation within the European Union territory”.

DEAC sees no point in building data centers in Russia. There DEAC has a partnership agreement with Synterra. It gives an opportunity to rent the space for customers who wish to collocate data in Russia.
Now the company has about 200 customers in Russia, a significant part of them are conducting pilot projects. Those are retailers, customers from the financial sector and advertising, real-estate companies, etc. Their technical support is provided from Riga.

The share of Russian customers in the company's revenue will grow increasingly and the annual revenue from working with them will reach over 1 million euro already in 2012, shares his expectations, DEAC head of marketing and development department, Olegs Naskidajevs. Another foreign data centers operator - Finnish Tieto - agrees that DEAC stated amount of revenue is achievable. 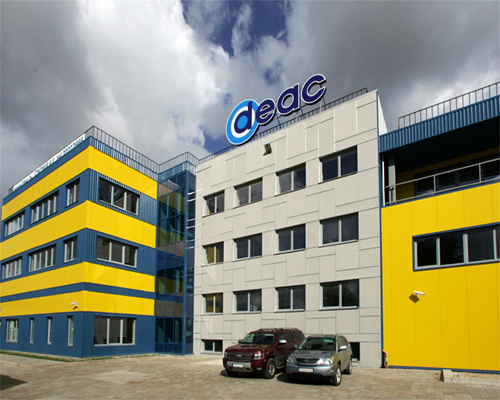 DEAC, which opens Moscow office, among the advantages of their data centers mentions their location in the European Union territory.


Dmitry Nazipov, Senior Vice-President of VTB Bank, believes that such proposals from foreign data centers are nothing new, widely known and popular in a certain range of companies. "The banks, including private ones, which are also acting under the bank secrecy act and the regulations of the Central Bank, can not freely pass data outside the country,” he says to CNews. “Large commercial companies, such as manufacturing industries are often interested in this. If feared worsening relations with authorities, the business that is not bound by regulatory documentations uses the services of foreign data centers."

Recall that Tieto in September 2010 became the controlling shareholder in the joint venture with Russian integrator “I-Teco", created on the basis of his data center "Trastinfo”. Terms of the contract include the option to 100% for the Finnish party joint venture, which means, Tieto eventually can become the host of the Moscow data center. This strategy of DEAC competitor fundamentally differs from the policy of the Latvian company.

"From our point of view, participation in the ownership of the data center gives the company greater control, security and integration with the global organization Tieto, as well as further development of data center services in accordance with our future vision," to CNews said Igor Yartym, Director of Tieto branch in St. Petersburg.

DEAC Moscow office is located on Sadovnicheskaya str. 82. So far there is only one person working. Control is from Riga. The company plans to make decision regarding the head of representative office by mid 2011. Until the end of 2011 five people will be hired for the representation office, mostly employees performing administrative work.

In the future, DEAC plans to continue opening representation offices. "At first we plan to open representation office in Kiev, where office may appear in the end of 2011, and in London in 2012,” says Olegs Naskidajevs. “The need for opening regional offices is set by the growth of customers’ critical mass that no longer can be serviced remotely from Riga as well as by improvement of telecommunications connectivity.”

DEAC total revenue in 2009 was 2.1 million euros. The company has 45 employees, its first data center was launched in 2000, the second - in 2009; total capacity of data centers "Riga" and "Grizinkalns", that are designed according to TIER IV and TIER II standards is 630 racks. For comparison, in the newly opened MegaFon data center in Samara 720 server racks can be collocated and in Novosibirsk commercial data center Sibirtelecom - only 70 racks.