DEAC is strengthening its representation office in Moscow

DEAC is strengthening its representation office in Moscow
10.07.2012 | Rating

Taking in account the increasing number of business deals and customers interest towards DEAC services, it was decided to expand the staff in DEAC Moscow representation office, where a team of experienced IT professionals and consultants will be working from now on.  The representation office will be headed by Olegs Naskidajevs, that previously held the director of DEAC marketing and business development department position.

Considering the intense operating mode, such a change will not affect Olegs Naskidajevs lifestyle, as during the last several months Olegs spend more time on business trips, that he spent in Latvian office. During the first month of 2012, DEAC has participated in several events as an IT expert or sponsor in many IT events in Moscow, St. Petersburg, Yekaterinburg, Kaliningrad.

Olegs Naskidajevs is among those executives of companies, which meet on a regular basis at round table discussion of CFO. In may this year the event took place in Greek town of Khalkidhiki, and in November last year – at Sicilia.
“It’s only natural, that a person in charge of DEAC marketing and business development department is now going to Moscow. As during the last years the main strategy of our business development was market”, said DEAC CEO Andris Gailits, and reminded, that at the time the crisis prompted to turn to foreign markets, as if the company have kept the focus on Baltic countries, DEAC would not have experienced such rapid development.  “As for today DEAC export share has grown up to 30%, while in the beginning of 2012 it was 25%. The share of export to is over 40%.

Besides customers, DEAC services are actively used by customers from 40 countries. The range of our customers is from California in USA till Sakhalin Island. The rapid turnover growth is explained by active export of services – during the last years, DEAC turnover has increased for more than 40% each year. In the last 3 years the number of customers has increased up to 35% - from 1800 up to 2500 customers.

“Such results are achieved by correct produсt positioning and the proper way to promote that product. Olegs is able to work in the market, and what’s also important – he likes it”, said Andris Gailitis.
Regular participation in IT conferences and summits, DEAC has gained experience and have generalized the main issues of IT industry. “Today DEAC is a known and anticipated participant at IT industry events”, said Olegs Naskidajevs, and added, that regular participation in CEO/CFO/CIO events have significantly increased the recognition of DEAC as well as trust among customers. 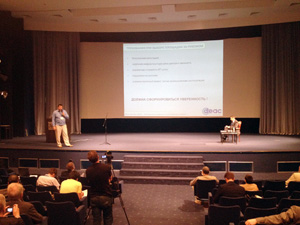 “For me personally – it is another step under DEAC banner, as I need to move to Moscow, and work there will be more responsible and independent. But I am not afraid of that, as I am sure of my professional skills and ability to achieve certain results. I believe in DEAC potential, in possibility of becoming a very large data center operator in European scale with impressive portfolio of customers”, summarizes Olegs Naskidajevs 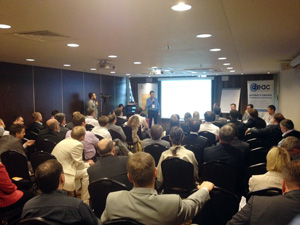