DEAC representative Vladimir Malinovsky spoke at a track “Open Source Software and Cloud computing” in a section “ Way to the clouds – new opportunities” with presentation “ Cloud or Beyond Cloud development perspectives of Open Source Software and cloud computing tandem” (presentation available here-Russian). V. Malinovsky spoke about DEAC visions of OSS and cloud computing perspectives, stressed out the common in this tandem in the context of business insurance and security, have analysed publicly available statistics and shown particular OSS solutions based on cloud computing. V. Malinovsky had also noted, that a cloud today – is a large data center with a certain set of requirements for equipment and software package; and within the next 3 years the market will almost finally pass from product to service, that in turn will lead to a certain cover-up of clouds in favor of data security. The main OSS consumer today is the government sector, where the largest part of OSS projects gets realized. DEAC agrees with the other participants opinion, that unified Open cloud standards and new cloud computing development strategy are required between cloud suppliers and cloud users.

Read more about the conference here 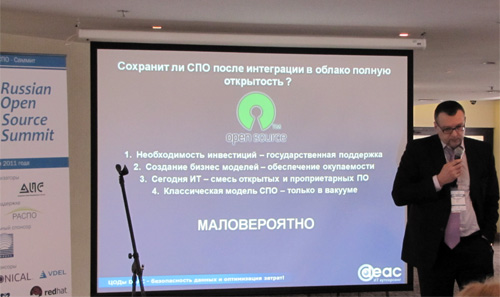