Already two years have passed since Latvia's largest data center operator in the Baltic States DEAC entered into the Russian market and today Russian business can already say with confidence about the relevance of foreign commercial data center in the Russian market. During this time, DEAC opened its representative in Moscow, implemented over 100 projects in the segment of medium and large Russian businesses from various industries, and at this moment, over 200 projects are under negotiation or already part of pilot projects. In 2011 DEAC data center infrastructure was enlisted among to the list of the world’s largest commercial data centers (by CNews analytics), making Baltic region more attractive for Russian business in due to close location to Moscow and data center infrastructure with high connectivity of data transmission channels, as well as a similar mentality of the population with a good knowledge of Russian.

What is the main reason for using European data center and which Russia's business challenges DEAC helps to solve?

At first, it is an economic component of cooperation, expressed in reducing costs by up to 40% within 3-5 years. Savings are achieved primarily through well-constructed scheme of power supply efficiency index lower than 1.5 PUE and inexpensive IT infrastructure. Also important aspect is quickly deploy of IT services, most of which are implemented within the hour, resulting on saving customer time, as no one has repealed concept of "time is money".

The second important point is geographical diversification of IT risks, allowing Russian companies to increase their competitiveness and to protect their business from all sorts of unforeseen circumstances. Today DEAC has two data centers in the European Union, both of them in Riga, capital of Latvia, the largest data center in the Baltic States “Riga” with 500 racks, scheme of power supply accords to TIER IV and second data center is an underground bunker “Grizinkalns” with an estimated number of racks 130 and scheme of power supply accords to TIER II.

Apart from its own data centers, DEAC has points of presence in Germany, Holland, UK and USA, using high connectivity to the largest points of traffic exchange in cities like Moscow, St. Petersburg, Frankfurt, Amsterdam and the others allows fast and reliable link between a customer geographical location and hosted data. Especially valuable is the fact that the IT infrastructure of DEAC data centers does not contradict federal law "On personal data ФЗ -152”, thus allowing Russian business to consider the options to use foreign data centers.

Commercial data center market today goes to another round of development, all the familiar words "cloud computing" and others begins to acquire more precise outlines, expressed in specific IT solutions that are understood for customers in terms of operation, safety and cost of ownership in terms of practical implementation based on its own IT infrastructure. Recent studies in the world shows up that the share of percentage use of commercial data centers in the implementation of IT projects already begins to crowd out customers own areas for several reasons. Commercial data centers have higher level of scalability, rapid start-up of IT solutions available around the clock, competent multilingual staff, as well as many other advantages that is much more implement, difficult and being costly realized for costumer by himself. DEAC cloud services starts from the standard infrastructure lease in the form of racks, servers, storage systems and ends with a full range of data centers IT outsourcing with the necessary software resources availability and personnel with different options to ensure continuity of service provision and disaster recovery IT solutions.

DEAC development strategy up to 2014 has a clear focus on strengthening geographical presence in Europe and United States as a launch of new data centers and new representation opening in Germany, Holland, UK, Ukraine and USA. Infrastructure of DEAC data centers in next years will deploy complex IT systems based on private clouds in Europe and USA for medium and large businesses in Europe and Russia for the long run. 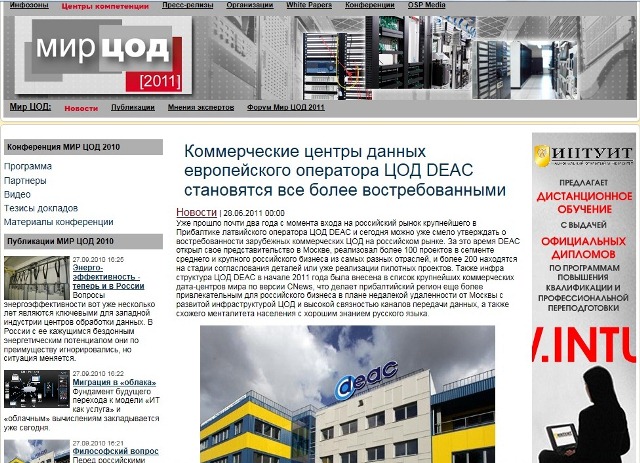 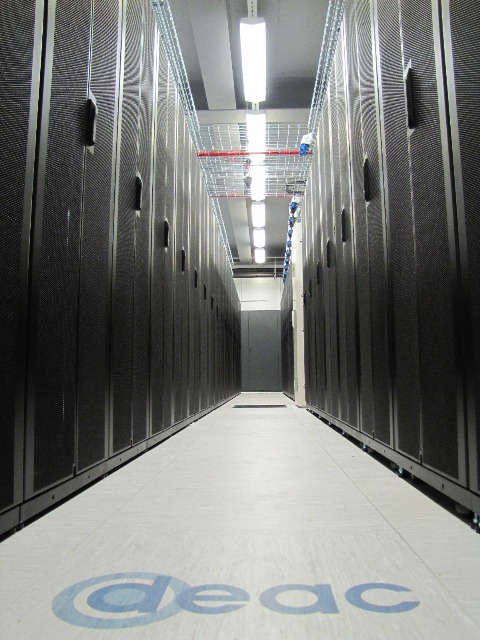