Need for speed: The new world of IT infrastructure

The rapid pace of change in today’s business landscape makes stagnant on-premise data centers inhibitors to success. Outsourcing allows organizations to focus on innovation that drives real business value – but speed is the key that drives business success today, so agility and flexibility should be at the heart of everything.

While it largely depends on an organization’s size, strategy and investment, it generally takes between one and two years for a large company to roll out its own data center. Add to that the huge operational resources required to run and maintain a data center, and it’s a hugely laborious strain on an organization’s ability to react to change. Business moves at a rapid pace, so organizations are increasingly finding it more effective to rent a data center, instead of owning. The maturation of technologies such as cloud and virtualisation has made this an even more appealing prospect.

Organizations in Western Europe are realising that better alternatives to the mainstream vendors lie further afield. Last year, DEAC, a growing operator with several data centers in Europe, enlarged its storage and processing capacity to provide its customers with one of the most powerful virtual platforms across the largest and most strategically important European locations.
Increasing its cloud availability across Europe, DEAC launches new solutions according to its customers’ needs and requirements. Recently, it launched two cloud-based solutions with a unique functionality: backup-as-a-service (BaaS) and desktop-as-a-service (DaaS). Depending on business needs, each customer gets a tailored cloud solution based on DEAC’s converged infrastructure and redundant network connectivity across Europe. It offers round-the-clock, superfast access to customers’ data, located in strategic traffic exchange points.

OF UK ORGANIZATIONS USE NEARSHORING OR OFFSHORING, AND THIS IS EXPECTED TO FURTHER INCREASE IN THE COMING YEARS (PA CONSULTING)

Being a carrier-neutral data center operator, DEAC is also not hindered by being serviced by other providers and does not outsource any of its infrastructure to a third party. This enables its engineers to minimize the time between receiving and delivering a service, which is so critical to many companies. All of this counts towards a superfast implementation delivery that sees seven of its key services – including cloud set-up, IP transit, cabling between racks, and server and rack rental – provided just one hour after agreeing a deal, and a pledge to reduce costs by up to 40% in three to five years.

The general make-up of the IT landscape has changed drastically in recent years. Traditional industry powerhouses such as IBM, HP and Dell have found themselves having to significantly retrench during a necessary shift from hardware to services, while outsourcing companies have enjoyed unprecedented growth. 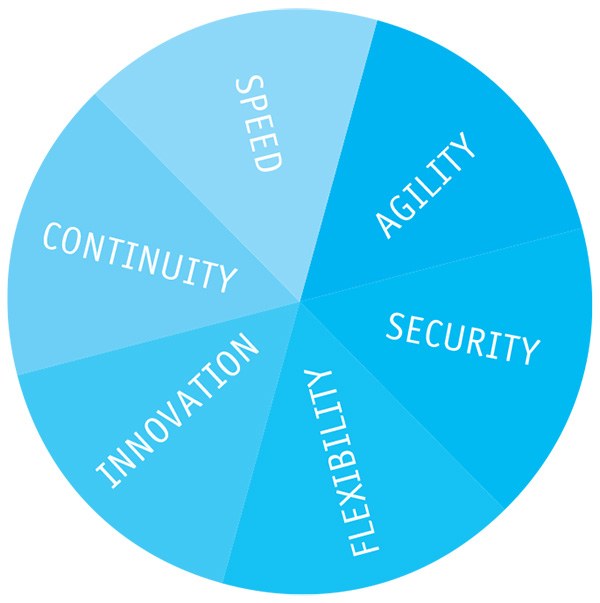 The culprit of this shift is cloud computing. The trend has vastly transformed IT’s role in the enterprise by making it extremely cost-effective to outsource the day-to-day functions that historically occupied most of their time and thus allow them to focus on deploying innovation that will actively position the business for growth.

Three to five years is the optimal period to achieve strong results from an IT project, and there has to be a strong vision of plans and options in the business strategy, as well as a vision to expand business or enlarge market share. When a company defines its strategy, it can then look at all the IT solutions it has used and evaluate them.

SECURE IN THE CLOUD

One of the major roadblocks to outsourcing IT infrastructure remains the perception amongst some that allowing data to physically leave a company’s premises can result in less protection.
A higher level of protection can be achieved by creating one or several backups in different data centers. For example, DEAC can offer to keep the main data in its data center in Riga and create a copy in another data center in Amsterdam, London, Frankfurt or Moscow. Outsourcing IT has continued to evolve and become more mature and consistent in delivering outcomes that the IT industry needs. Looking forward, it will continue to grow as the pace at which technology, and its role in the enterprise, changes.

Superfast and tailored solutions for specific and complex requirements.

Choose the most convenient way to receive fast DEAC support 24/7.