DEAC – one of the year’s socially-amenable companies

Business-education society Junior Achievement – Latvija (JAL), during award-ceremony “Years best in economy 2009”, on 18th June, first time in Latvia, has nominated socially-amenable companies and organizations. DEAC – is one of such companies.

For several years DEAC is cooperating with JAL, supporting and participating in different kind of projects, organized by JAL, that conduce development of business-education in Latvia. For example, three years running, DEAC participates in JAL project – Your advertisement.

Cooperation with JAL is not the only one, related with education development. DEAC participates in Riga region information science olympiad organization, supporting financially and by creating olympiad tasks. “ It is very important to support the development of education in Latvia, and the Latvian companies are very much interested themselves to see new and educated professionals in future Latvian job market”, says DEAC CEO Andris Gailitis. 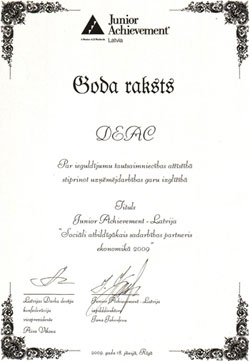 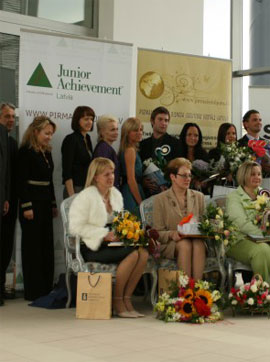 DEAC offers a full range of integrated IT solutions and to almost 2000 customers from 20 countries of the world, among them – Spanish telecommunication operator „Telefonica”, „Danske Bank”, „Unicredit bank”, „Latvijas Bank”, „Rietumu Bank”, “Elko Group” „DEPO DIY”, “Microsoft Latvia”, “Philips Baltic”, „TV3 Latvija”, and others.
DEAC is the developer of a popular Latvian school management system e-klase.
DEAC is an official distributor of DELL in Latvia and an official partner of „Microsoft”, „APC” „VMware”, „EMC” and „Synterra”.
More about data center operator DEAC – www.deac.eu